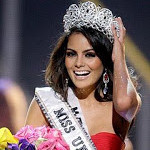 Jimena Navarrete, the 22-year-old from Guadalajara, Mexico is our new Miss Universe, she beat out 82 contestants for the top spot. The Mexican native Navarrete in less than 24 hours after she was crowned has become a sensation on trending topics on Twitter and thousands of fans have flooded her Facebook fan page.

So, we at My Quince magazine give her props. So who is the woman who ousted 82 other competitors for international beauty bragging rights? Here are five things to know about Jimena Navarrete…

1. She knows how to handle tough questions

After Monday’s pageant in Las Vegas, Navarrete was asked her opinion about Arizona’s recent immigration law and she strategically answered without alienating either side. “Every country has the right to impose and enact their laws,” she said. “But I tell you that all the Mexicans and the Latinos that are living here in the United States are hardworking people – people who want to improve on their quality of life.”

2. She’s been modeling since she was a teen

Since the age of quince, the 5-foot-8-inch Navarrete, a self-described nature enthusiast who enjoys boating and motorcycles, has been working in the modeling world with gigs that include working the runway at fashion shows. Most recently she walked at Mexico Fashion Week 2009 for designer Macario Jimenez.

During her reign as Miss Universe, she hopes to bring attention to people with HIV/AIDS and breast cancer – but she also plans to let “the whole world to know about my country and my people,” she said after the competition. Her most prized possession? Her sash because it “has Mexico’s name. I’m very proud to be representing my country and it’s a big honor for me,” she previously said.

“I studied nutrition and I would like everyone to understand that it is not about your looks it is how you feel inside,” the brunette, who is only the second Mexican woman to win the Miss Universe title, said through an interpreter. “And when you feel good inside you look good.”

5. She likes sensitive men – and already found hers

“The advice that I can give to all the men in the world, it would be to be more sensitive, more lovely or to express in an easy way [what] you’re feeling,” she said during a pre-pageant interview with the Miss Universe organization. Navarrete seems to have found that in her boyfriend of four years, Pablo Nieto.